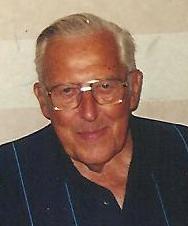 Warren “Murph” Snay, 90, passed away Thursday evening, June 30, 2011 at Willard Healthcare. He was born in Attica, Ohio on December 7, 1920 to Myrl and Ada (Reed) Snay and had been a resident of Willard most of his life. He was a 1938 graduate of Attica High School. He married Ruth Miller on April 5, 1953 and she survives. Warren was a member of the Willard Christian Alliance Church. He was also a past Attica Grange member and Huron Valley School Board member. He worked several places during his lifetime including Heisler’s, Shelby Air Force Depot, Fruit Growers Express, and farmed for many years. He retired after 22 years as a scale clerk at the “Tuby” in Shelby. After retiring he and his wife spent their winters in Lake Havasu City, AZ.
He is survived by a son and daughter-in-law, Scott and Kellie Snay of Kingman, AZ; two daughters and sons-in-law, Suzanne and Jon Moll and Sharon and Don Danhoff, both of Willard; seven grandchildren, Sarah (Chris) Casson, Matthew and Sadie Snay, Kara, Eric and Laura Danhoff and Emma Moll; three step-grandchildren and one great grandchild.
He was preceded in death by his parents and brother, Russell.
Friends may call from 5:00 to 8:00 PM Saturday, July 2, 2011 at the Secor Funeral Home in Willard, Ohio. The funeral service will be on Sunday, July 3, 2011 at 1:00 PM at the Christian Alliance Church, on Route 224 with Rev. Jim Trainer officiating. Burial will be in Attica Venice Cemetery. Memorial gifts may be made to the Christian Alliance Church or Stein Hospice. Online condolences may be made to www.secorfuneralhomes.com.

Sending my sincere sympathy to your entire family.

Dear Ruth, It’s Sunday morning and I just received your e-mail with the news of Warren’s death. We are so sorry, but have good memories of our visits with you over the years.
We just talked with Kathryn so there must have been a phone problem when you tried to call her. Her number is 419-636-5448.
with sympathy and love, Ted & Penny

Snay family, sending my sincere sympathies to you on the loss of your husband and father. It has been many years since our 4-H years, but remember those years fondly.