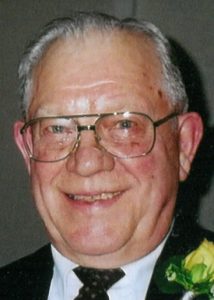 William F. “Bill” Radune, age 93, resident of Sandusky, Ohio and former Willard resident passed away Monday, June 9, 2014 at Providence Care Center in Sandusky, Ohio. He was born on March 7, 1921 in New Britain, Connecticut to the late William and Anna Radune. He was a member of the Trinity Lutheran Church in Willard, Ohio and formerly the St. Paul Lutheran Church in Westlake, OH, where he was the organist and pianist. He enjoyed working in the yard, gardening, was a lifelong sports fan and former athlete. He was a U.S. Navy veteran during WWII where he was a Sonar Technician on the U.S.S. Rodman.
He is survived by a daughter, Pat (Dennis) Guerra of Sandusky; two sons, William F. Radune, Jr. of North Olmsted and Charles Radune of North Ridgeville; six grandchildren, Jackie (Tim) Gifford of Florida; Lisa Dougal of North Carolina; Julie (Brad) Harbison of Westlake; C.J. (Zita) Radune of North Ridgeville; Kylene Guerra of Cleveland; and Joe Guerra of Columbus; seven great grandchildren, Lexis, Trent and Drew Gifford, Taylor Dougal, Lauren and Emily Harbison and Embry Radune; sister-in-law Sandy Radune.
In addition to his parents he is preceded in death by his wife, Priscilla (Embry) Radune on February 7, 2009; a brother, Bob Radune; and three sisters, Ruth Bryant; Eleanor Peterson; and Jane Steed.
Visitation will be Thursday, June 12, 2014 from 10:00 – 11:00 A.M. at the Trinity Lutheran Church in Willard where the funeral service will be held at 11:00 A.M. with Pastor Roger Thompson officiating. Burial will follow in Maple Grove Cemetery in New Haven, Ohio. Memorial contributions can be made to the Trinity Lutheran Church or Stein Hospice of Sandusky, Ohio. Online condolences can be made to the family at www.secorfuneralhomes.com

Blake Avenmarg - Jul 7, 2019
Pat, Bill and Charles, Your family are very special friends of my family and have been for almost 70 years. I treasure the memories of the many special times we shared. Please keep in touch. Longone610 @aol.com.
Mark Surawski - Jun 11, 2014

Dear Patty, Charles & Bill,
Cathy and I are very sorry for your loss. Your dad was always kind to me. I will remember him for his playing the piano and also for how much my mom looked forward to his visits to Connecticut.
With sympathy,
Mark