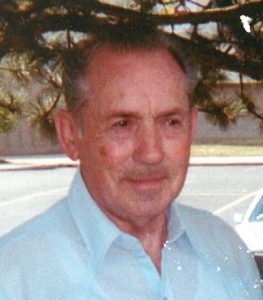 Winford C. Oney, age 95, resident of Shiloh, Ohio passed away on Saturday, December 20, 2014 at the MedCentral Hospital in Shelby, Ohio. He was born December 12, 1919 in Magoffin County, Kentucky to the late William Curtis and Maude (Lykins) Oney. He retired from the Martin Steel Company in 1983. His greatest joy was spending time with his family but his hearts’ desire was to go home to be with his wife and their Lord and Savior. He enjoyed bluegrass music, playing the guitar and banjo and working outside, especially in his garden.
He is survived by 4 sons, Eugene (Karen) Oney of Lodi, Lowell (Kathy) Oney of Columbus, Oral Oney (Reno Hall) of Shelby and Wayne (JoAnn) Oney of Mansfield; 4 daughters, Brenda (Dave) Poffenbaugh of Shiloh, Almeda Francis of Shiloh, Charlotte (Larry) Kamann of Plymouth and Sharon Detterman (Dave Harvey) of Mansfield; 18 grandchildren, 25 great grandchildren and 2 great-great grandchildren; sister, Margaret (James) Elam of Canal City, KY; brother, Mitford Oney of Shiloh and several nieces and nephews.
In addition to his parents, he is preceded in death by his wife of 70 years, Tressie Mae (Amyx); son, Winford P. Oney; infant daughter, Iris Fay Oney; grandson, Gregory R. Oney; brothers, Thelmer, Parnell and Victor Oney; sister, Mary Oney.
Visitation will be Monday, December 22, 2014 from 6:00 to 8:00 P.M. at the Secor Funeral Home in Plymouth, Ohio, where the funeral service will be Tuesday, December 23, 2014 at 10:00 A.M. with Rev. Earl Tackett officiating. Burial will be at the Mount Hope Cemetery in Shiloh, Ohio. Memorial contributions may be made to Hospice of MedCentral in Mansfield, Ohio. Online condolences may be made to the family at www.secorfuneralhomes.com.

I’m glad that i have a lot of great memories of being around Grandpa when i was a little kid. I was glad i could come up to visit him for his 90th Birthday. I now know he is in a better place, with our lord and with grandma Oney and the rest of the family who has gone before him. Rest in peace Grandpa.

I feel so blessed to have spent more time with Grandpa over the last couple years than I ever did before. He was always so thankful to see me and I know he is in a better place where he was anxious to be. It makes me happy to know because he talked about it with me often. It is a happy ending to 95 years!

My sincere condolences on the passing of Winfred. I’ve thought of all of you often over the years and the times spent in Adario during our younger years. I remember Winfred with fond memories. May he be at rest now in the arms of Jesus.