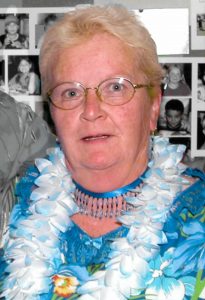 Elizabeth Theobald, age 68, resident of Willard, Ohio, went to be with her Lord on Wednesday, January 22, 2014 at the Willows in Willard. She was born on October 19, 1945 in Irlam, Manchester, England to the late Edward and Esther (Kirk) Mace. She had picked out her husband, George Theobald and was married on October 2, 1965 in St. Johns Church in Irlam, Manchester, England. Elizabeth and George moved to the United States in 1970 and she had worked as a secretary at a doctors office for 22 years in Cleveland, Ohio, before retiring. She enjoyed Ballroom dancing with George and just visiting with people.
She is survived by her husband, George Theobald, whom he thinks of her as “his most beautiful bride”; siblings, Ann and Brenda Sist; sister-in-law, Joyce; 3 nephews and 2 nieces and by her loving dog, Rusty.
She is preceded in death by her parents, Ted and Esther Mace; mother-in-law and father-in-law, Edith and John Theobald; and brother-in-law, Ray Theobald.
Due to the weather, the memorial service has been changed and will be held on Friday, January 31, 2014 at the Grace United Methodist Church in Willard, Ohio at 11:00 A.M. with Pastor Steve Anderson officiating. Friends may gather at the church one hour prior to the service. Memorial contributions can be made to the Heartland Hospice. Online condolences can be made at www.secorfuneralhomes.com

George; My thoughts and prayers have been with you since living with your wife in the Willows for
several weeks in November 2013 I regret not knowing her earlier in her life. Losing your mate in life is not easy and may the Grace of God and comfort of friends and loved ones help at this sad time.

Dear Mr. Teobald, I want express my sympathy to you and your family at the death of your wife. Just know that my prayers are with you during this difficult time. God’s peace and love be with you.

George, My thoughts and prayers for you today and in the days to come.Matthew 5:4 Blessed and enviably happy are those who mourn, for they shall be comforted!

Dearest George,
Lee and I are praying for you and for Elizabeth, we know how much she was in your heart and mind. We ask Our Father to keep her close to him and guide her through her days. We ask the Lord to keep you healthy and strong in mind and body and heart.
God be with you always,
Lee and Edie Perry

George – my thoughts and prayers go out to you and yours.