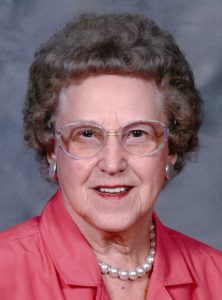 Esther M. Kreim, age 93, of Bucyrus, Ohio passed away on Saturday, June 20, 2015 at the Hillside Acres Nursing Home in Willard, Ohio. She was born on June 29, 1921 in Cranberry Township to the late Edward M. and Louise (Durnwald) Kreim. She was a clerk for the Air Force Depot in Columbus. She was a member of St. Bernard Catholic Church in New Washington, Ohio.
She is survived by her sister Delores (Woody) Tackett of Willard; brother, Gerald (Mary Ann) Kreim of New Washington; sister-in-law, Jean Kreim and many nieces and nephews.
In addition to her parents, she is preceded in death by siblings, Richard Kreim, Virgil Kreim, John Kreim, Joe Kreim, Arlene Bechthel, Arvilla Karl and Catherine Kempf.
Visitation will be at Mother of Sorrows Catholic Church in North Auburn, Ohio on Wednesday, June 24, 2015 from 10:00-11:00 AM where a mass will be at 11:00 AM with Fr. Eric Culler officiating. Burial will follow at St. Bernard Catholic Cemetery in New Washington. Online condolences may be made at www.secorfuenralhomes.com

To Esther’s family,
I had the honor of knowing Esther while she was a patient at the hospital. I think she is one of the strongest and kindest ladies I have met. Please accept y condolences on your loss.
Sue Wolfe