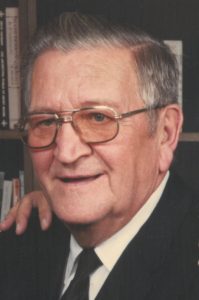 Frank Naistetler, age 95, of Willard, Ohio, passed away on Saturday, April 19, 2014 in Plymouth. He was born on May 9, 1918 in Willard to the late Frank and Rose (Krumpholtz) Naistetler and had been a lifelong Willard resident. Frank was a retired electrician from the Ohio Power Company, a member of St. Francis Xavier Catholic Church and a veteran of the US Army having served during WWII.
He is survived by a son, Kurt Naistetler, a daughter Kimberly; a sister Anna Cunningham; five step children, Alfred Wilson; Larry Barnthouse; Ada Lucille Wilson; Daniel Wilson; Lillian Harmoning (Glenn), several grandchildren, great-grandchildren, great, great grandchildren and several nieces and nephews.
In addition to his parents he is preceded in death by his wife, Claramay Nichols Naistetler in 1988; brother, August “Gus”, sisters Rose, Emma and Marie (Mary) Niastetler, step-children Bobbie Meridith, Mary Lou Batesole, Bill E. and Nancy Wilson.
Friends may call at St. Francis Xavier Catholic Church in Willard, Ohio on Tuesday, April 22, 2014 from 10:00 A.M. until 11:00 A.M. where a funeral mass be held at 11 A.M. Burial will follow at the St. Joseph Catholic Cemetery in Willard. Online condolences may be made to the family at www.secorfuneralhome.com

I remember Frank when he worked at the water plant on Central Avenue. He use to let us kids come in and get a coke from the coke machine which only cost us a nickel. He was always so kind and always smiling at us. I also remember him from St. Francis Xavier church. God’s faith always shined through Frank. I know that OUR DEAR LORD was holding out HIS HANDS welcoming Frank to HIS HEAVENLY KINGDOM saying. “Come my faithful servants you have pleased ME in so many faithful ways.” May peace and comfort be to Frank’s family and may Frank be a light of faith for all of us. He will be missed. Rest in peace Frank! Another angel has got HIS wings.