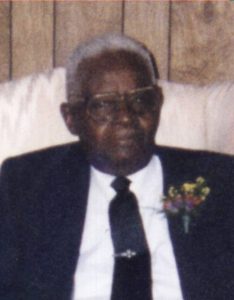 Hubert Carl Carmichael, age 105, passed away on Sunday, July 8, 2007. Hubert was born Oct. 25, 1901 in Turin, Ga. He was the son of Dostor & Julie Carmichael. He was married to Dolly Carmichael for over 50 years before she passed away in 1980. Hubert worked for the B&O Railroad in Willard for 40 years. He was a member of the First Baptist Church in Willard for over 60 years and was a deacon of the church. Hubert was an U.S. Army veteran of W.W. II.
He was preceded in death by his parents, wife, 4 brothers and one sister.
Hubert is survived by his sister, Mattie Hill of Turin, Ga. and his niece Virginia Barrison of Willard, who was his caregiver, and also survived by a host of nieces, nephews and friends.
Funeral service will be at the Secor Funeral Home in Willard, Sat., July 14, 2007 at 11:00 A.M., with Rev. Jeffrey Jones officiating. Visitation will be Sat. from 10-11 A.M. at the funeral home. Burial will be at the Greenwood Cemetery in Willard. Memorials may be made to the First Baptist Church in Willard. Online condolences can be made at www.secorfuneralhome.com