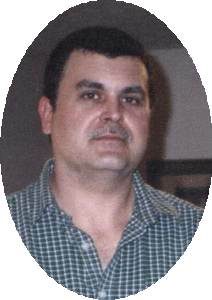 Robert A. Daniel, age 37, resident of Willard, Ohio passed away unexpectedly at his home on Wednesday, July 18, 2007. He was born on March 3, 1970 in Norwalk, Ohio and has been a life long Willard resident. Robert was a 1988 graduate of Seneca East High School and attended the Ehove School of Nursing receiving his LPN licensing. He was employed with Lake Park Industries in Greenwich. Robert enjoyed playing the guitar and spending time with his children.
He is survived by his wife Donna (Patton) Daniel of Willard; his children, Alyssa and Ian Daniel; a grandson, Carsyn Daniel; father and step-mother, James and Rachel Daniel of Chandler, AZ; maternal grandmother, Marie Gates of Norwalk; one brother and sister-in-law, Dennis and Shelly Daniel of Willard; two sisters and brothers-in-law, Susan and David Homan of Willard; Laura and Mark Butler of Sandusky; six nephews and one niece.
He is preceded in death by his mother, Rose (Gates) Daniel on August 2, 2001; his paternal grandparents and maternal grandfather.
Friends may call at the Secor Funeral Home in Willard on Friday July 20, 2007 from 6 to 9 PM. Funeral services will be held at the funeral home on Saturday at 10:00AM with Fr. Paul Fahrbach officiating. Burial will be held at a later time in St. Sebastian’s Cemetery in Bismark, Ohio. Online condolences can be made at www.secorfuneralhome.com