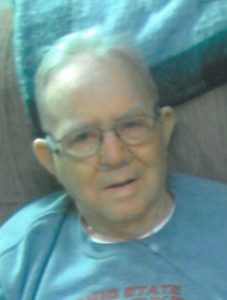 Jack Terveen, age 89, of Willard, Ohio passed away Wednesday, December 22, 2010, at the Hillside Acres Nursing Home in Willard, Ohio. He was born August 31, 1921 in Bellevue, Ohio to the late J.D. and Ella (Helling) Terveen. He was a 1939 graduate of Bellevue High School. He was a proud Army Veteran of WWII, serving as a Master Sergeant and receiving a Purple Heart and Bronze Star. He was a past Exalted Ruler of the Willard Elks Lodge #1370, the Willard American Legion and a past member of the Willard Golf Club. He was active in the Willard Athletic Boosters and was a timekeeper for the Willard Basketball for 45 years and the Willard football announcer for 34 years. He was a member of Trinity Lutheran Church in Willard, Ohio and was a retired Switchman for Northern Ohio Telephone Company, which became known as GTE.
He is survived by one daughter, Janet (Gordon) Moore of Cincinnati, Ohio; one son, Tod (Sue) Terveen of Willard; three grandchildren, Sherri (Creed) Cornett of Cincinnati, Scott (Danielle) Moore of Cincinnati and Brielle Terveen of Willard; two great-grandchildren, Nicholas and Emmaline Moore and one sister, Eleanor Hammontree of Newago, Michigan.
He is preceded in death by his wife, Donna J. (Wolfe) Terveen of 68 years; his parents; one son, Terry Terveen and two brothers, Robert and James Terveen.
Friends may call at the Trinity Lutheran Church on Monday, December 27, 2010 from 1:00 to 2:00 P.M., where the funeral services will be Monday at 2:00 P.M., with Rev. Amy Little officiating. Burial will be at the Greenwood Cemetery in Willard, Ohio. Memorial contributions may be made to the Willard Athletic Boosters or the Willard Elks Scholarship Fund. Online condolences may be made to the family at www.secorfuneralhomes.com

Your dad was an important fixture at all of our basketball games when I was going to high school, class of 1962. I also got to know them through Trinity Lutheran Church. It was an honor to know them both.

Tod and family – keeping you in my thoughts and prayers during this difficult time. I always admired your Dad’s spirit and spunk – may it continue on in your hearts.

Tod, Sue, and Brielle,
Please accept our condolences on the passing of your father and grandfather. May it help to know that may others care and share in your sorrow.
God Bless you and grant you comfort,
Cynthia and Dennis Branham
Summertown, Tennessee

Todd & Family
On behalf of the Grimm Family, we extend to you the most heartfelt sympathies. My parents were John William Grimm & Arvilla Mae Grimm. I visited your Mom & Dad when they were in the nursing home 2 years ago. Fond memories were shared and will be kept in my heart forever. Again, our deepest sympathy. Cherish memories -that’s what will last a lifetime.
God Bless You .
Becky & Andrew Grimm
Bellevue Ohio

Todd and Sue, I’m Truly sorry to hear of Todd’s father’s passing. You are in our thoughts and prayers.

Tod and Family, sorry to hear about the passing of your Dad.

We want to extend our heartfelt sympathy to the family of Jack Terveen. My father was Frederick Terveen (Fritz) Grimm, oldest child of Fred & Cora Grimm of Bellevue, Ohio. Dad & Mom (Katie) loved Jack, the Terveen family and their life-long relationship. I remember your father well and have fond memories when the family would gather together at Grimm Reunions. May God Bless Jack Terveen & the Terveen family this Christmas season. Bob & Cindy Grimm, Indianapolis, IN

I am sorry to hear of Jack’s passing. You are in my prayers

Tod and family, so sorry to hear of your dads passing. Really extra hard this time of year and so close to your moms passing also. Please know that dad and I send our condolences.

Todd and family,
Truly sorry to hear of your father’s passing. I was fortunate enough to visit with both of your parents this past spring and they were a joy to be with. Their stories stirred up great memories. God Bless!