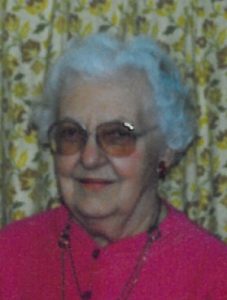 Zetta May Sybrandt, age 100, resident of Elyria, Ohio, passed away Wednesday, December 22, 2010 at the Wesleyan Village in Elyria, Ohio. She was born on August 21, 1910 to the late Harry and Elizabeth (Snyder) Brooks and had been a resident of Plymouth most of her life. She was a retired school teacher, after 39 years of teaching, who taught at Elyria, Shiloh, North Fairfield, Spencer and Shelby. She was a member of the Naomi Circle, Joy Group, A.A.R.P., Richland County Teachers Assoc. and the Shelby Area Retired School Employees. She was a member of the Plymouth United Methodist Church and had worked several years at the Upstairs Store in Plymouth.
She is survived by three nieces, Beverly Flaherty of Plymouth, Bonnie (Ed) Cordle of Berlin Heights and Melody Brooks (John Tarby) of Willard; one step daughter, Bridget Sybrandt of Erie, PA; and three step grandchildren; several great nieces and nephews, Brian, Shannon and Will Flaherty; Megan, George, Skylar, Seth and Hayden Johnston; Tayloy Cordle and Parker Sakulich.
She is preceded in death by her husband, Harry Sybrandt; one step son, Lloyd Sybrandt; and one step daughter, Madeline Rosenthal.
Friends may call at the Secor Funeral Home in Plymouth, Ohio, on Tuesday, December 28, 2010 from 10:00 AM to 11:00 AM where the funeral will be at 11:00 AM with Pastor Beth McKee officiating. Burial will be at the Greenlawn Cemetery in Plymouth, Ohio. Memorial contributions may be made to the Wesleyan Village Bell Choir or the Plymouth United Methodist Church.Online condolences may be made to the family at www.secorfuneralhomes.com

I will add my name to the list of former students, having had her as Miss Brooks at the beginning ot the school year,but with the name change to Sybrandt later that year if I remember correctly. She was my home room and Social Studies teacher in sixth grade at Hamilton School. My most vivid memory is after Pearl Harbor weekend, of the principal coming in to class to announce that President Roosevelt had just declared war. The boys cheered, and I can still picture her telling them that they did not realize what they were doing.
I went back to college in my thirties to finish, and ended up teaching mostly third grade for 29 years. One effect of having had her as a teacher was that I kept Mars bars in my desk drawer for after school. She did as well. She was a teacher that I recall fondly, even at my ripe old age of 81. One of my college profs said that we would catch ourselves doing things that teachers we had had did. I hope in whatever way I tried doing that, that I did it well! She was a great one.
Joan Lamoreaux Myers
4305 Township Road 99
Mount Gilead, Ohio 43338

I wanted to extend my sympathy in Mrs Sybrandt’s passing. She was my 6th grade teacher at Auburn school in Shelby, ohio. I remember a lot about that year over all the rest.

Mrs. Sybrandt was my advanced math class teacher in 6th grade. I can see her to this day moving purposely through the class in her black shoes explaining the different math concepts.She was tough but she also had a kind side to her that I would find , I think some days much to her chagrin! A great teacher! Sylvia Godby LeClair