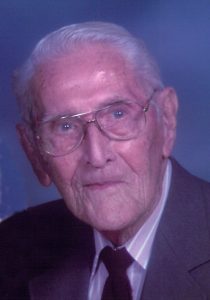 Noel H. McQuown, age 99, of Willard, Ohio passed away Tuesday, January 24, 2012 at the Willard Healthcare Center in Willard, Ohio. He was born March 15, 1912 in Forest, Ohio to the late Bruce and Mary (Harmon) McQuown. He was retired from Warner Swasey in Cleveland, Ohio where he lived from 1944 to 1999. He had moved to Willard in 1999 and had attended the Willard Christian Alliance Church. He was a US Navy Veteran from 1943 thru 1945 in WWII.
He is survived by his wife, Mary Ellen (Cope) McQuown whom he married Dec 8, 1934; 2 brothers, Floyd Nelson (Thelma) McQuown of Willard and Norman (Beulah) McQuown of Mansfield and many nieces and nephews.
He is preceded in death by his parents, 2 sisters, Madalyn Shields and Beulah Clinger and a brother, Kenneth McQuown.
Visitation will be held on Friday, January 27, 2012 at the Christian Alliance Church in Willard, Ohio from 1:00 to 2:00 PM where the funeral service will be at 2:00 PM with Rev. Jim Trainer officiating. Burial will follow at the Greenwood Cemetery in Willard. Memorial contributions may be made to Abigail Ministries, PO Box 64, Norwalk, OH 44857 or the Christian Alliance Church. Online condolences may be made to the family at www.secorfuneralhomes.com

I was Mr. McQuown mail carrier and I will miss him. Almost every day during the summer he would come out and get his mail and talk to me about the Cleveland Indians. I will miss him smile and our short conversations. My prayers are with his family.

Dear Family–we are so sorry to hear of Noel’s passing. He and Maryellen were always so pleasant and welcoming when we were able to attend your family get-togethers. Uncle Norm–we are especially keeping you in our thoughts and prayers. Peggy and Steve

what a blessing for me to have known Noel and what an amazing life. He will be missed by the Gordon Clinger family.
My prayers and condolences to the family during this time.
Sandie (Clinger) Fuller