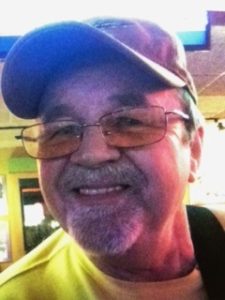 Robert Donald Cox, age 73, of Willard, Ohio passed away Thursday, May 19th, 2022, at Stein Hospice in Sandusky, Ohio after a brief battle with Sarcoma.  He was born on September 20th, 1948, to the late Donald and Gwendolyn (Beelman) Cox.  He is also preceded in death by his sister, Kathryn.

Bob as he was known to most, was a 1967 graduate of Willard High School.  He was drafted to serve his country in the U.S. Army during the Vietnam War.  Upon returning from abroad he held several jobs, most notably as a Clerk / Operator with Chessie System.  While employed there he spent most days at J Tower where he likely played more guitar than actually working.  Realizing that he wasn’t built for the grind of a traditional job, he pursued his lifelong passion which was music.  While he played the piano, he was best known for his mastery of the guitar utilizing the fingerstyle technique, inspired by Chet Atkins.  Over the years he played thousands of events as a solo artist, and with various friends.  One of his favorite gigs was Bob Cox and Friends which was held during the Willard Festival in the Park.   This show would gather the people he enjoyed playing with the most to jam for a few hours that evening.  Bob taught guitar at The Richland Academy of the Arts and as an Adjunct Professor at Kenyon College and Mount Vernon Nazarene College. He gave many private lessons out of his home and volunteered lessons at MANCI.

Bob also was a lifelong Cleveland Indians and Cleveland Cavaliers fan with a preference to listen to the game on radio instead of watching it on TV.

Bob ate bacon nearly every damn day, consumed copious amounts of Splenda and generally went where the breeze took him that day.  He was laid back and enjoyed the company of friends, family, and his dog Della in which he created numerous YouTube videos of him playing the guitar while she laid close by on the couch.

Bob is survived by his spouse of 17 years, Annette; daughter, Jennifer (Josh) Jester; son, Glenn (Tania) Cox; two step sons, Wayne Hampton and Craig (Jody) Hampton.  Papa Bob as he was known was the grandfather to 10 grandchildren ranging in age from 3-16.

Family and friends may visit on Sunday, May 22, 2022 at the Secor Funeral Home in Willard from 2:00 p.m. until the time of his funeral service at 5:00 p.m. A Celebration of Life will be held at a later date. Memorial contributions can be made to Bob’s family. Online condolences can be left for the family by visiting www.secorfuneralhomes.com.

Joe & Janet Androsac - May 24, 2022
Our condolences to the Bob Cox Family. Bob was a great musician and will be very much missed by all who knew him.
John J.Garcia - May 23, 2022
I'm so sorry to hear of Bob's passing. He was truly a cool gentleman. Willard will be sadly a little quieter without his great music. Peace Be With You Bob!
Cynthia J Van Wagner-Alt - May 22, 2022
I am so sorry for your loss. Bob played guitar with my brother Dick, I am sure they're playing music together again. Bob was such a nice guy and so talented. May your special memories, his music & God's love sustain you through the difficult days ahead. God Bless, Cindy
Bob Ayres - May 22, 2022
It was certainly sad news to hear of Bob’s recent health problems and his subsequent passing. I considered him a good friend since we roomed together in a couple of rental properties for a few years in the early 70s, and a few years later playing guitar at my wedding. I admired his musical talent and envied his easygoing approach to life. No doubt, he will be missed by many. Kind thoughts and prayers are going out for Bob and his extended family. May God provide strength and comfort for the difficult days ahead, and fond memories for the years to come.
Steve and Lois Stemple - May 22, 2022
Bob was a great friend and a wonderful musician. We will truly miss him.
Greg Moore - May 22, 2022
I only met Bob a few years back but we started rehearsing together and became good friends . We made so much acoustic music together and loved the same artists ,it was a common thread with us. I will miss his wisdom ,and he had lots of it . Goodbye to my great guitar buddy .
Fred McKinney - May 22, 2022
I first knew Bob as guitar teacher, but he quickly became a mentor, helping me to write songs. He had a good ear for songs and provided support and positive feedback. And he was a good friend. I miss him already and hope to meet him somewhere down the road. Condolences to Annette: we will keep you in our prayers--Fred and Linda.
Lenny T. Hoffman - May 21, 2022
Truly one of the all time greats. Move over Jimi and let Robert take over.
Cheryl Van Wagner Hamons - May 21, 2022
So sorry for your loss. My condolences to your families. Bob was one of the nicest guys ever. He was so talented. I always enjoyed listening to him play. He will surely be missed. He left a great legacy for his family to carry on.
Paul Reece - May 21, 2022
Bob was a great guitarist as well as a great guy. Relaxed and laid back. Bob backed me up numerous times on guitar and always made me sound 100% better than I was. R.I.P. My condolences to Annette and family.
Cindra Boring - May 21, 2022
Bob was my guitar teacher and a great friend. He helped me record a couple of my songs, and I sang with Bob Cox and Friends at the Willard Park. Bob was a fantastic guitar player and a wonderful person! I am so sorry for your loss!
Krystal Hamilton - May 21, 2022
Bob was so special. He taught me guitar almost 25 years ago. He was so patient and kind. My deepest condolences to his family.
Francine (Doan) Smith - May 20, 2022
Was in Bob’s class- thoughts and prayers to the family. Rest In Peace.
Scotty K. - May 20, 2022
I don't believe the words have yet been found that could truly convey the feeling that one got after spending even a short time with Bob. An absolute gem of a human being. So incredibly talented yet so willing to share his wealth of knowledge, always with a laugh. Bob was an amazing teacher, neighbor and friend. My heart goes out to Annette, I can't tell you how many times Bob told me how lucky he was to have you in his life. And I can't tell you how fortunate are those of us who have had the pleasure to have known Bob.
Holida family - May 20, 2022
We are so saddened by the passing of Bob. Our family grew to love and appreciate Bob because of the special friendship he had with our son, Ben. They often played guitar and attended music events together. We will be forever grateful to Bob for the positive influence he had on our son and we know that Bob’s music will continue on through Ben and all the others he mentored. Hugs and prayers to you all.
Gracie Dials - May 20, 2022
Cox family, I am so sorry for your loss. Bob was a great guy. I remember Bob playing music since we were in high school. His music friends will miss him dearly. RIP Bob. Your music will forever be with us all.